Ezine peyniri: Ezine cheese, mostly produced around the region with the same name in Çanakkale, can be made using cow, goat, or sheep’s milk. It’s eaten for breakfast and dinner, and is often paired with melon or added to salads.

Kars kaşarı (peyniri): Kars kaşarı is a hard, aged cheese that is made in the region of northeast Türkiye, near the city of Kars. The cheese is usually 90% cow milk and 10% sheep milk.

Van otlu peyniri: Van herbed cheese comes from the southeast region around Van and is usually made primarily using sheep milk. There are 25 different herbs that can be used in this cheese.

Kaymak: This thick clotted cream generally accompanies something sweet, usually honey. It’s a staple on the breakfast table but can also be found in various desserts. The best kaymak is made using the milk from water buffalo.

Pekmez: This thick syrup of grape molasses often accompanies tahini on the breakfast table. Though usually made from grapes, pekmez can also be made from mulberries, plums, apples, pears, pomegranates, and carob.

Tahin: Tahini is a paste made from ground sesame seeds that is common in Turkish cuisine. It’s used in hummus as well as in desserts, and can be combined with lemon juice and oil to make a dipping sauce or a dressing.

Pestil: This is a fruit leather that is made by pounding fruit into a thin layer, which is then left to dry. It’s most commonly made with apricots.

Pastırma: This dried cured beef is usually served in thin slices and has a distinct salted flavor. It’s often further cured with a paste made of garlic, fennel seeds, and red peppers.

Sucuk: This Turkish sausage is usually made with ground beef, cumin, and garlic, and can be fatty and spicy. It’s most often paired with eggs or vegetables.

Lakerda: This salted bonito dish originates in the Black Sea region near İstanbul and is a popular meze.

Taşköprü sarımsağı: It is a special type of black garlic which is cultivated in Kastamonu.

Maraş biberi: A special type of red pepper, which is grown in Kahramanmaraş, suitable for drying and turning into dried chili pepper.

Sumak: This spice is maroon-colored and has a citrus-like tartness that makes it pair well with a squeeze of lemon juice.

Zahter: Made out of wild thyme or black thyme, zahter (or za’atar as it is more commonly known in English) grows in rocky terrain and is dried in the sun. Mixed with other regional spices and often with the addition of olive oil, it is a popular flavor throughout the broader region.

İsot: Isot pepper comes from Şanlıurfa and has a distinct black color and smoky flavor. It’s used often in lamb dishes, as well as with vegetables or eggs.

Hamsi: The Black Sea’s most famous fish, hamsi, or Black Sea anchovies, are incredibly popular and usually in season in the winter. Hamsi is cooked in many different ways, and is often served cured or fried.

Enginar: Artichokes are often served topped with diced carrots and peas, over oil. They are mostly in season in the springtime.

Anason: Anise seed creates a bold flavor that is most commonly used to flavor rakı, a popular Turkish alcoholic drink.

Safran: Saffron is a reddish-gold, pungent spice that is most popular in Iran but is also grown in Türkiye. It turns most dishes it is used in a pleasant shade of yellow.

Zeytin: Olives of all colors and sizes are popular in Türkiye. Usually olives are black or green, but sometimes olives are soaked in beet juice to turn them pink. They are an ingredient in many Turkish dishes.

Baklava: This sweet dessert is made by layering nuts between phyllo pastry and then soaking it in sugar or honey syrup. It’s often made with walnuts or pistachios.

Şalgam: This tart, bright-colored drink is made with black carrots or turnips and sour and salty brine, and has a refreshing, savory flavor. It can be paired with rakı. 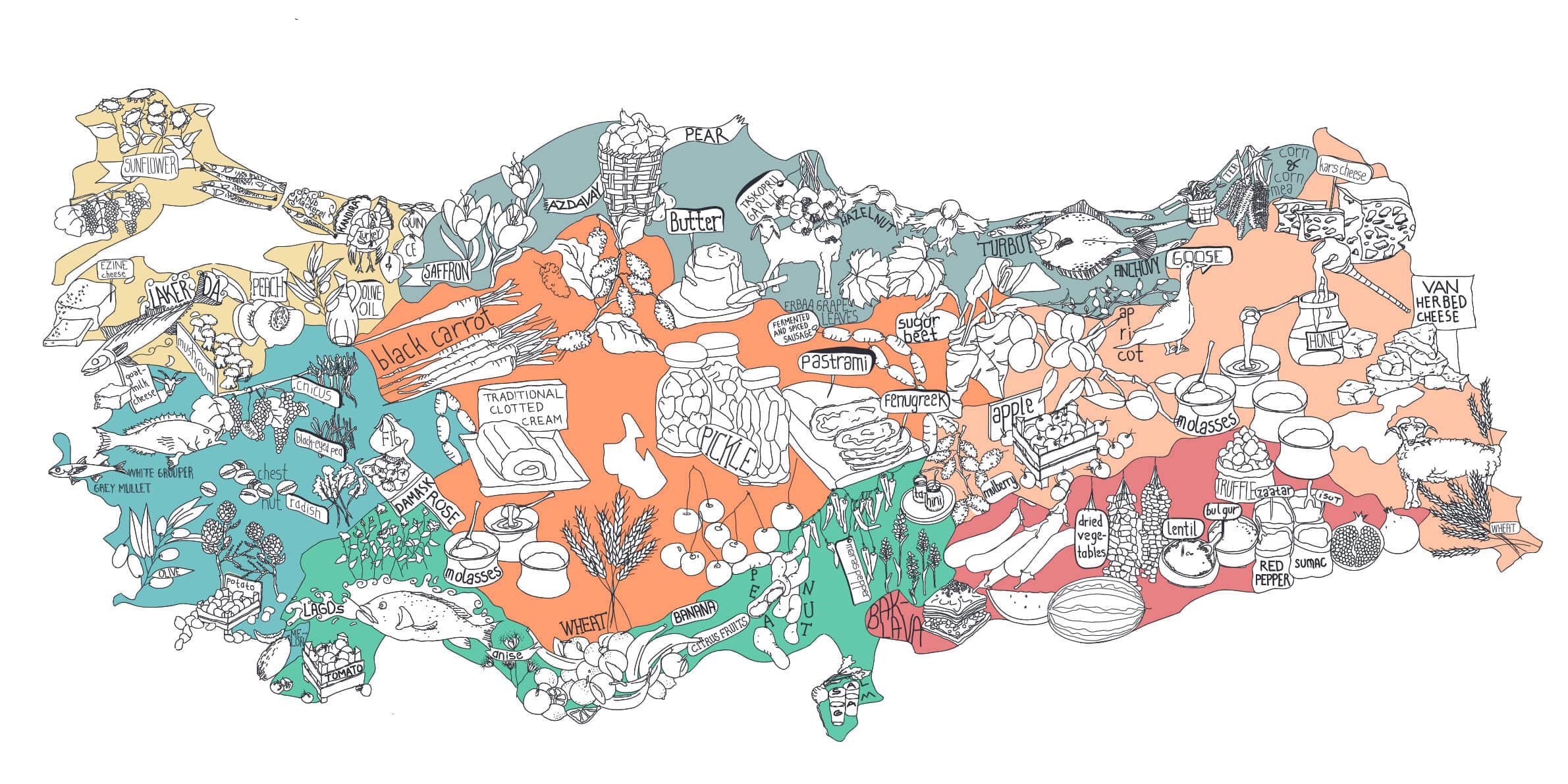 When you think about Turkish food, do meat and kebabs come to mind? Believe it or not, fresh fish is also an important part of Turkish gastronomy. There are traditional fish restaurants in most regions where you can enjoy seasonal fresh fish with a fresh local salad. The meal will start with fish mezes and seafood, of course!

Çöp Şiş: Originating in Türkiye’s Aegean region, çöp şis is a kebab variety which can be literally translated as “trash shish” or “garbage shish.” Despite its unusual name, this delicious dish is made with roasted lamb scraps and fat, the leftovers from trimming the meat for the classic shish kebab.

Sucuk, also spelled sujuk, is a Turkish national dish. Turkish sucuk is usually made with ground beef, though some butchers add a bit of lamb for more flavor. Sucuk is a semidried beef-based sausage made using a dry-curing process.

Most vegetable plants prefer moist, mild climates. From this standpoint, Türkiye has extensive land suitable for cultivating vegetables, and as a result, different parts of the country are devoted to the cultivation of different types of vegetables. Although green leafy vegetables have traditionally been grown in Türkiye’s western regions, recently irrigation and hydroponics have opened up other areas to their cultivation as well.

Most Turkish desserts have a story to tell. Thanks to Türkiye’s rich and diverse cultural heritage, most desserts are linked to a urban legend, a story that is intricately part of the recipe. Many dessert recipes date back to Ottoman times or even further back to Central Asiannomadic Turkic tribes.

THE MOST POPULAR SPICES IN TURKISH CUISINE

There are many reasons why traditional Turkish cuisine is so appreciated all over the world. Details such as the combinations of ingredients used in cooking, cooking techniques, and indispensable cooking sauces make Turkish dishes tasty for everyone. However, the most magical parts of Turkish cuisine are the hidden spices.

Bread (ekmek) is an essential part of the Turkish meal and is therefore eaten daily, including in the form of pide, simit (Turkish bagel), yufka, and lavaş. Bread is highly respected in Türkiye and is rarely wasted.

Böreks are prepared by rolling out dough with a rolling pin into a circle of the desired size and filling it either with a cheese-parsley mix, a ground meat-onion mix, or spinach. Then, this is shaped into thin packets of pastry, and fried. Or as in lasagna, the rolled out dough is layered with one of the different fillings mentioned above, and baked in the oven.

Soups may not be the star of Turkish cuisine, but they are always the starter course of a typical Turkish meal and sometimes the favorite choice for breakfast. Turkish people have developed a very rich variety of soups. Soups are made in various ways in different regions, and with ingredients such as beef, chicken, fish, offal, legumes, vegetables, flour, yogurt, and pasta (şehriye and erişte).

Olives are an essential element of Turkish cuisine. Whether as the star of the breakfast table or to create olive oil, olives are always appreciated.

Yogurt, or yoğurt as it is called in Turkish, is one of the most popular ingredients in Turkish cuisine, eaten at breakfast, lunch, and dinner, and even consumed as a drink. The word “yogurt” itself comes from Turkish. Studies have shown that an average four-person family in Türkiye can consume nearly 5 kg of yogurt per week. Yogurt is often used as a topping, or a side dish, and is also used as the base for many meze and main course meals. It thickens soups and Turkish desserts.

Cheese consumption begins at breakfast in Türkiye, where it's most often the main course, and continues throughout the day. Turkish meat dishes like kaşarlı köfte (meatballs stuffed with cheese) combine meat and cheese. Cheese is also served as a starter, or meze, with fish and meat entrees. Crumbled or grated cheese is also added to salads.

Pide is a traditional flatbread with different kinds of toppings that can be found in most regions in Türkiye.

Pide has a rich culture in our country. The kneading of the dough varies from region to region in term of the materials used and the style of presentation. The pide gets its flavor from the stone oven in which it is cooked. It can be made with various materials such as minced meat, diced meat, cheese, herbed cheese, pastırma, egg, or a mixture of tahini, honey, and walnuts.

Traditional syrups and sherbets, a name derived from "sharba" which means "drink," have found their place in Türkiye from Persian food culture and have long been favorites with their myriad flavors and healing effects.